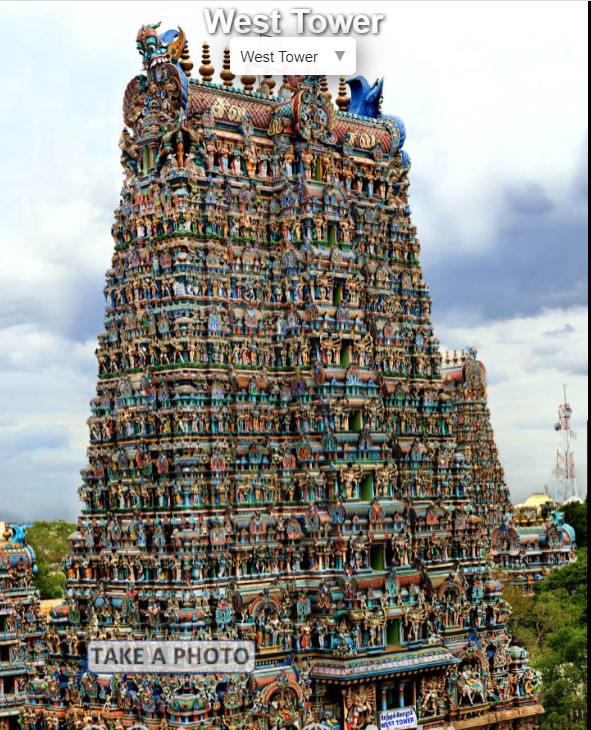 The Meenakshi Temple is situated on the southern bank of the Vaigai River in the Tamil Nadu city of Madurai, which was constructed between the years 1623 and 1655 and its amazing architecture is globally renowned. The Meenakshi Temple is primarily dedicated to Goddess Parvati, known as Sundareswarar (Shiva) to Meenakshi and her husband. This temple is quite different from other temples of the country because both Shiva and Goddess Parvati are worshiped together in this temple. Legend has it that Lord Shiva, born as Sundareswarar, visited Madurai to marry Parvati (Meenakshi).

This place being the birth place of Goddess Parvati has been sacred from the beginning, so this Meenakshi temple was built to remember and worship Parvati. The Meenakshi Temple is very beautiful in appearance which consists of 14 entrance gates or ‘gopurams’, golden towers, sacred sanctum sanctorum. Thousands of devotees visit this temple daily because of the sanctity and attractions of this temple. If you are also going to visit this temple or want to know in detail about Meenakshi temple, then definitely read our article completely.

There are many mythological stories associated with Meenakshi Amman Temple. There is a story that this temple was built by Indra Dev, when he came here to atone for his sins. Another legend says that Goddess Parvati appeared as the daughter of the Pandya king Malayadwaja Pandya, as she prayed a lot to the Lord. Let us tell you that that girl had three breasts and it is said that when she met her husband, her third breast had disappeared on its own. The name of the king’s daughter was “Tadatagai” and she was the heir to the throne. She was well trained in 64 scriptures and had knowledge of all subjects to rule the kingdom wisely.

The history of Meenakshi temple dates back as far back as the 7th century. The first changes to the structure of the Meenakshi temple are said to have been made by King Vishwanatha Nayaka of Madurai in 1560, during the reign of Tirumalai Nayaka (1623–55) the temple had several complexes, including the Vasantha Mandapam and the Kilikokondu Mandapam. Are included. The tanks of the Meenakshi Amman temple and the corridors of the Meenachi Nayakar Mandapam were built by Rani Mangalam.

Many controversies arose about the succession to the Pandya throne around the 14th century. Alauddin of Delhi invaded Madurai in 1310 and exploited the anarchy. His general Malik Kafur was behind the extensive loot of the city which disturbed the life of the common people. Of the fourteen minarets of the Meenakshi temple, all were destroyed except only Sundareswarar and Meenakshi.

Meenakshi Amman Temple reflects Dravidian architecture. The temple is most famous for its towers or ‘gopurams’, which are visible even from a distance. Around 12 gopurams adorn the Meenakshi temple, with the four outer ones rising to a height of over 160 feet. The temple complexes are made of high brickwork walls and are divided into several square enclosures. Meenakshi Temple is one of the few temples in Tamil Nadu that has four entrances from four directions. There are about a thousand pillars in the building of this temple. From the state gate to the pillars of this temple, images of various gods and goddesses have been engraved.

between 1623 and 1655. It has 14 gateway towers, whose height is 450 meters. The tallest tower among them is the South Tower, which stands at a height of 170 feet. There is also a large tank or potramarikkulam in the temple complex, which is filled with holy water. Let us tell you that the main temple here which is dedicated to Meenakshi and Sundareshwar is surrounded by three complexes and is protected by four smaller towers. The shrine of Meenakshi is located southwest of the shrine of Sundareswarar, where the goddess herself is in the form of a black stone. The temple of Sundareswarar is in the center and both the temples have gold towers, which are visible even from a distance. An idol of Lord Ganesha carved out of a single stone is present in the Vinayaka temple here. The sanctum sanctorum of the temple is adorned with many forms of Indra Vishnu and Lord Shiva. There is a temple of Nataraja within the Sundareswarar temple complex in which the Nataraja idol of Lord Shiva performs the Tandava (cosmic dance of destruction).