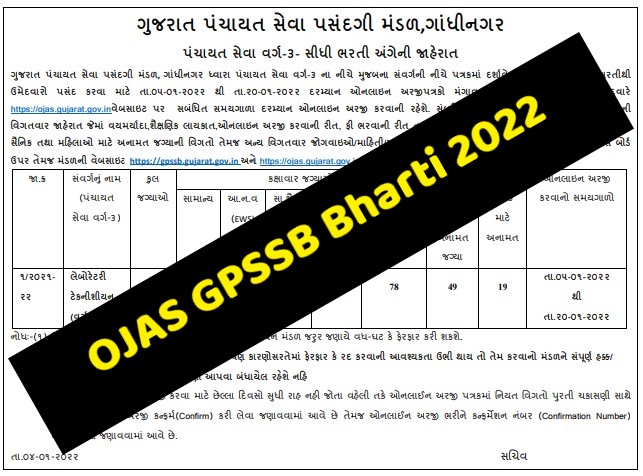 Apply Online @ojas.gujarat.gov.in: Gujarat Panchayat Service Selection Board, Government Of Gujarat has issued the GPSSB Bharti 2022 notification to recruit eligible candidates for 16000+ various vacancies. Recently, Panchayat minister Brijesh Merja Tuesday launched the website of Gujarat Panchayat Service Selection Board (GPSSB) – gpssb.gujarat.gov.in, which will be a one-stop platform for all the recruitment procedures for various cadres of Panchayat Class III services to be done by the board, said an official release

Gujarat Panchayat Service Selection Board (GPSSB) has announced various vacancies for their regional offices opening job portal for 10th pass, 12th pass, and graduated candidates. The candidates who are interested in the GPSSB Recruitment and wants to know the summary for the recruitment process, then refer to the table below-

The duty of the Board is to select candidates for recruitment to Class III posts in the Panchayat Service and to advise the Panchayats in such matters as prescribed by the rules.

The Board also advise panchayats for disciplinary action against panchayat service class III employee as per District Panchayat proposals in case of:

How many vacancies are announced for GPSSB Recruitment 2022?

Around 16000+ vacancies for various Posts are announced through GPSSB Recruitment 2022.

What is the full form of GPSSB?

The full form of GPSSB is Gujarat Panchayat Service Selection Board.

What is an online application portal?

ojas.gujarat.gov.in is an online application portal for GPSSB Jobs.

Iconic One Pro Theme | Powered by Wordpress
We use cookies on our website to give you the most relevant experience by remembering your preferences and repeat visits. By clicking “Accept”, you consent to the use of ALL the cookies.
Do not sell my personal information.
Cookie SettingsAccept
Manage consent